TigerGaming is using the services of the Chico Poker Network which was based on the software of the Action network when it was launched in 2012. The latter went out of business because of various issues with payments. You shouldn’t worry about that, though, as Tiger Gaming and Chico made sure this isn’t the case.
Another problem related to Action network was the buggy poker client which forced Chico to transfer to the software of Connective Games in 2016. As a result, the performance is much improved and the players of TigerGaming can enjoy a solid service.
One of the most curious things about TigerGaming is that it’s one of the few Chico members that don’t accept American players. However, if you join the room, you will be able to play against US competition as most of the other Chico network members have no such a restriction. Thanks to our TigerGaming review, we can confirm that the level of the competition in rooms with US players is significantly worse compared to other online poker platforms.

TigerGaming can’t compare to the best in the business in terms of traffic, but is right behind them. There are a couple of hundred players at any given moment and this number surpasses one thousand during the peak hours. Unfortunately for European players, our TigerGaming review showed that the most action in the room is during the evening in the USA which is early morning in Europe. Still, you will be able to find a decent number of tables around the evening in local times too.

Since the cash games of TigerGaming are the most popular, let’s start our traffic overview there. The formats offered are for 4, 6, 9, and 10 people. The games that run are mostly NL Hold’em, but also PL Omaha and Omaha Hi Lo to an extent. Here’s what to expect on the different limits:

We decided to pay some special attention to the HU tables in our TigerGaming review, so it’s not included in the information above. The reason is simple – all Heads Up tables at TigerGaming are anonymous. This gives you a good chance of finding some fish, as there are no endless waiting lists of regulars when a bad player shows up. TigerGaming doesn’t offer much traffic on those tables, but there are a couple of tables on all limits up to $200 NL Hold’em or so. Don’t forget that the Heads Up tables are a great way to earn plenty of Tigergaming rakeback.

If you plan to play SNG at stakes of up to $10 or so, TigerGaming is a good choice. There is some decent traffic and the opposition is very soft. However, the higher levels don’t run often, so you won’t be satisfied if you expect action in mid or high stakes.

Next in our TigerGaming review are the multi-table tournaments. There are some interesting daily choices with a buy-in of up to $20 mostly, but a lot of them are rather inconvenient if you live in Europe. TigerGaming also has some larger weekly tournaments with bigger guaranteed prize pools, but once again, there’s not enough action if you’re a strictly tournament player. If you combine that with cash tables or SNGs, that’s another story.

When Chico network was still relying on the software of Action Poker, things weren’t looking good. Thankfully, there is a large improvement since 2016, as our TigerGaming review showed. The poker client is still a bit behind the best in the business, but is comfortable enough. You can customize a lot of stuff on the tables, pick a preferred seat, and use other convenient features. Another advantage of TigerGaming is that the room offers mobile versions for iOS and Android users.

Another important part of our TigerGaming review was focused on the external software available. The truth is that the Chico network doesn’t like Holdem Manager and Poker Tracker very much. However, you can use hand grabbers to implement them.

Let’s take a look at the rake structure at Tiger Gaming and see what to expect in the different formats:

It’s a bit tricky to calculate the exact % of Tigergaming rakeback, as the room doesn’t have a VIP Program. For the first 60 days, you can take advantage of the 100% first deposit bonus of up to $2,500. It equals about 33% in Tigergaming rakeback. You will also earn comp points that can be exchanged at a rate of 6% rakeback or so.
The room has plenty of other promotions that will help you get much more than that. For a start, the weekly leaderboards for cash tables, MTTs, and SNGs award tens of thousands of dollars each week. There are plenty of other offers that could also boost your Tigergaming rakeback, so make sure to check the Promotions page on a regular basis.

❓ Why is it profitable to play on TigerGaming?

TigerGaming is a flagman room of Chico Poker Network, where US residents can play. Thus, the field in this room is rather weak.

❓ Can HUD be used on TigerGaming?

Yes, you can use HUDs and statistics trackers on TigerGaming using a converter. Contact with us via Skype or Telegram to get the converter.

❓ What rakeback can I get playing on TigerGaming?

Playing from PokerProDeals can get you up to 60% rakeback in TigerGaming room. Contact with us via Skype or Telegram to get more deal details. 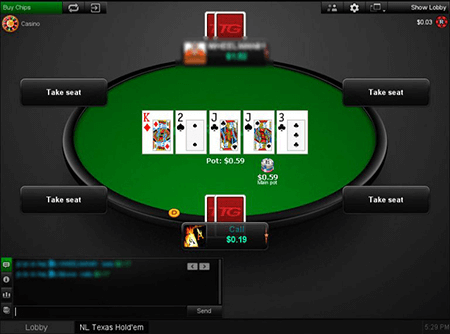 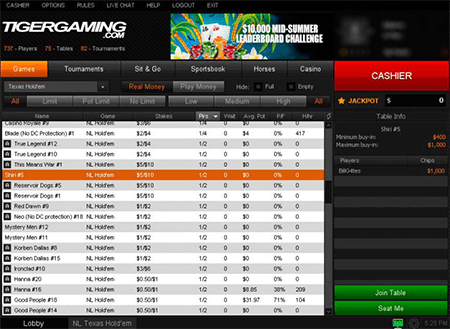 How to register in TigerGaming?