Upoker is a new mobile poker app that is rapidly gaining popularity in 2019. The creators of the app tried to take all the best from their competitors. Unlike most mobile poker apps, Upoker decided not to be limited to the Asian online poker market and it has clubs from various regions and countries. Upoker paid great attention to the software, which has a user-friendly interface and supports English language.

Currently, Upoker is not very popular amongst regulars, which provides a pretty low level of opposition. To put it simply - there are enough weaker players for everyone. For the most part, Upoker will be an interesting option for mid-stakes players (from NL200 to NL1000), who are looking for weaker fields. But even if you play lower than NL200, we still recommend you to try playing at Upoker. It is quite possible that due to the low level of opposition you will be able to significantly increase your bankroll and move up in stakes.

In order to comply with the legal restrictions of various countries, the game runs for chips that can be exchanged for real money. The cashier is available via agent. All cashouts will be handled by PokerProDeals. For deposits and cashouts you can use the following payment methods: Skrill / Neteller / ecoPayz.

Upoker uses the traditional (for mobile poker apps) system of clubs and unions, which are essentially closed pools. A player applies for membership in a club and after its approval he can start playing. Most clubs are from Asia, but there are also some clubs from other regions. For Asian clubs, the peak hours happen from 4PM to 9PM Moscow time.

Most clubs offer regular action at stakes from NL200 to NL1000. PLO is as popular as NLHE. Many clubs have HU-tables both in NLHE and PLO, as well as OFC, Holdem 6+ and even tournaments.

All clubs are pre-tested for fairness of the game and the level of opposition, and only then they get into the list of clubs in which PokerProDeals provides access to.

The client is not much different from well-known PokerMaster and PPPoker. It has versions for iOS, Android and PC. English language is supported.

After logging in to your account, you will see a list of clubs in which you are a member. When you click on the club logo, you will get a list of available tables with their key features: game type, stakes, number of players and remaining time. The tables are created for a limited time - usually 2 hours.

Trackers are not supported. In the client you can see the basic stats of your opponents: VPIP, the number of hands played and the results at the table. You can write notes and use color labels. Built-in hand replayer is also available.

VPN is not required. From one account you can play only one table

The size of the rake varies depending on the club but it doesn’t exceed 5%. Compared to other mobile poker apps, these numbers look very attractive.

To get the full info about the rakeback deal at Upoker - feel free to contact our managers.

You can use Android emulator for playing Upoker on your PC. You can get detailed installation instructions by contacting us in Skype or Telegram.

We provide access to only reliable Upoker clubs with weak fields.

❓ In what currency is the game on Upoker?

Upoker uses chips. There are different exchange rates for each club, depending on its region. You can get more details by contacting us in Skype or Telegram. 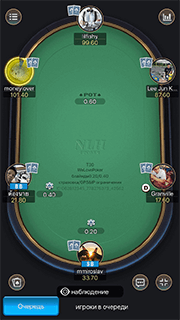 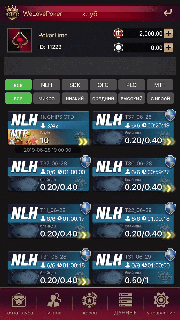 How to register in Upoker?